If you’re unfamiliar with driving in Germany or the rules of the road, it’s recommended you leave the driving to an experienced guide or driver. If you plan on drinking while on tour, the legal limits are far lower than they are in the USA. Police often set up stings and check points just down the road from a club knowing that people drink. You’ll lose your license and expect a court appearance and high fines.

POLICE AND POLICE AGENCIES IN GERMANY 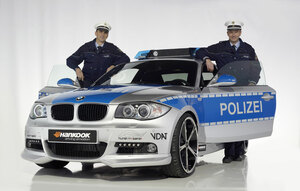 Speed Traps and Speed violations
Police operate differently in Germany than in the USA. Most of the enforcement is done via radar cameras, which are permanently installed or mobile set ups that are randomly positioned. The Germans call them “Blitzers”, or translated “Flashers”, named for the familiar flash when activated or tripped. These can be found on autobahns as well as in small towns and sometimes they don’t even flash. 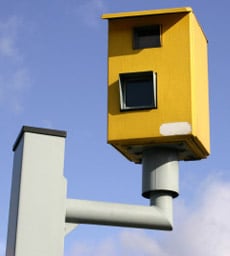 Note: when you enter small towns or in large cities where you see reduced speeds

You’ll see speed reduction signs such as this 30 Zone

Pay close attention to these speed zones as they often are followed by Photo Radar Cameras.

What happens when you get a Photo Radar Camera violation?
When you rent your vehicle, within the fine print of your rental contract is a clause that holds you responsible for any and all tickets, whether they be parking or speed violations.
The rental car company will also bill you an administration fee ranging from 10 to 25 Euros on top of the fine. The cost will be billed to your credit card. Sometimes the ticket will be mailed to your billing address directly; the rental company will also bill for an administration fee. You’ll have to wire transfer the funds to the German state, town or city. Even tickets from other countries like the Netherlands, Austria, France, etc. will be billed to your card. Failure to pay will mean the fees are doubled and tripled after which they’ll be referred to a collection agency.  If you return to Germany and have unpaid tickets you may be in for a surprise.  A decade ago they did not enforce the fines but since then they have enlisted collection agencies and even put blocks on you being able to rent cars.

In the USA, the color “RED” is for police or emergency vehicles, in Germany it’s “BLUE”.

When Police patrol the highways, note the blue bar which sits atop the police vehicle. In the U.S. we’re used to police coming up behind us and turning on red lights to indicate that we’re required to pull over and stop. In Germany, police will pull ahead of you and turn on their “blue” light-bar which has in English and German “Please Follow” or “Bitte Folgen”, which indicates that you are then required to follow them and stop behind them.

There are two types of Police in Germany, the border Police and the normal Police.
1. Bundespolizei (BPOL) is the uniformed federal police force. The Bundespolizei was previously known as the Bundesgrenzschutz (BGS) (“Federal Border Guard”).
2. Federal Criminal Investigation Office (Bundeskriminalamt BKA), has approximately 3,000 agents, and operates nationwide out of its headquarters in Wiesbaden. Similar to the United States Federal Bureau of Investigation (FBI).
3. State Police, known as the Landespolizei.

The Landespolizei are the state police forces:

There are other agencies working within Germany, but the above are the main ones you may encounter during your trip.

While anyone with a driver’s license can rent a car and GPS unit to get around in Germany, the laws and ways people drive differ from the U.S.

1. On the autobahn always stay to the right, left lanes are for passing only.
2. While the autobahn is known for unlimited speeds, pay close attention to speed limit signs
3. German right of way differs than the USA, while generally the car on the right has the right of way pay attention to the painted markings on the ground.
4. Never pass on the right.
5. Flashing your high beams, honking and flipping a finger are now against the law and considered ROAD RAGE. Fines are steep and anyone can report you to police.

RIGHT OF WAY AND ZIPPER RULE

When traffic slows on the autobahn or a multi-lane highway the “Zipper Rule” goes into effect.  Normal right-of-way rules are void and the “zipper rule” (Reißverschluss) goes into effect. This means cars feed one at a time alternating from each direction, regardless of who has the posted right-of-way. The zipper rule applies when one lane ends and merges into another, each vehicle in the through lane must allow one vehicle from the truncated lane to merge in.

U.S. Citizens Driving in Germany
If you’re going to drive in Germany, take some time and read this well written guide Getting around in Germany.